The XCP system is designed to run in the Linux bash shell or from a Docker or Singularity image. We strongly recommend using Docker or Singularity. Users provide XCP Engine with the output from FMRIPREP and specify parameters for the analysis that they wish to perform. XCP Engine parses the user-provided parameters to build and run a processing pipeline. The XCP system supports a number of pipeline modalities, including functional connectivity, structural processing, and task fMRI.

XCP Engine provides tools to take FMRIPREP output and perform the next steps required for many functional connectivity and structural analyses. FMRIPREP is required for initial preprocessing of fMRI data; XCP performs denoising and computes additional derivatives used for analyses. For structural processing, either FMRIPREP or the dedicated struct module in XCP can be used. 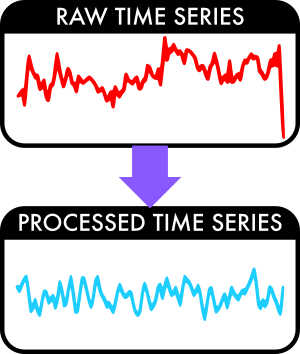 MRI time series collected from the scanner are typically noisy. Processing mitigates the effect of artefact and moves all subject-specific images into a common atlas space to facilitate direct voxelwise comparison.

It encompasses denoising, filtering, registration, and production of any subject-level derivative maps (for instance, seed-based connectivity maps or task contrasts). Processing includes production of summary measures on both a voxelwise and ROI-wise basis. Notably, processing in XCP does not include group-level statistical analysis.

The XCP system was designed with the importance of scientific reproducibility in mind. Often, research groups process neuroimages using a dedicated, standalone “pipeline” for each image modality. For instance, task activation, perfusion, and functional connectivity analyses might each be processed by a separate script.

However, this approach can easily lead to inconsistencies in output directory conventions, difficulty tracking pipeline versions, and limited flexibility in updating pipelines, all of which ultimately combine to compound reproducibility challenges. Often, many common routines are deployed across multiple MRI modalities, and it is in the interest of the investigator to minimize redundancy and maximize reproducibility.

The modular, atomic design of the XCP system allows for streamlined reproduction and recombination of frequently used image processing strategies across multiple pipelines and modalities.

The XCP system aims to provide a multimodal library of common processing routines that will improve scientific reproducibility. Features include: